SMi’s Close Air Support (CAS) conference is now in its fifth successful year, which is set to take place on the 5th and 6th June 2019 in London. 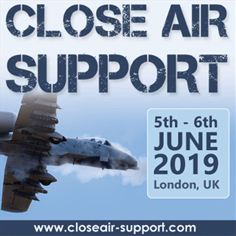 This year’s event will aim to provide relevant mission updates from real-time operations, as well as provide in-depth discussion on key areas of interest which include; international programme updates, digitally aided CAS, joint fire delivery and targeting, command and control, JTAC training and operations, CAS platform updates and avionics, and more, aiming to provide delegates with a unique, in-depth perspective of the industry.

CAS 2019 will provide the chance to meet with vital Air-Land representation from the British Army, Royal Air Force, US Air Force, US Army and US Army Europe, as well as France and Germany.

As the leading meeting for exploring developments in joint fires for ground forces, this year’s conference is the only focused forum for professionals to hear specialised, high-level briefings on delivering operational superiority.

For those interested in attending there is a £200 Early Bird discount on bookings expiring on Tuesday 30th April 2019. Places can be reserved at http://www.closeair-support.com/vuelio