Frankfurt, 20th February 2012 - (Nasdaq: SSYS) Stratasys today announced the tenth anniversary of its Dimension 3D Printer line, the first of its kind to bring 3D printing technology to a broad audience and accelerate the trend of 3D printer use in the market today. 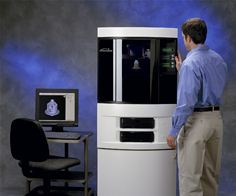 Additive manufacturing industry consultancy, Wohlers Associates, affirms this trend in Wohlers Report 2011, noting “Additive manufacturing’s reach was previously relegated to high-tech laboratories at Fortune 100 companies, but it now extends to the smallest of organisations - and increasingly even to individuals. In the…industry’s 23-year history, its compound annual growth rate has been 26.2 percent.”

When introduced in 2002 at $29,900 (approx.£18,850), the Dimension 3D Printer opened new possibilities for designers as a reliable, compact, simple-to-use machine, at about half the cost of the next lowest-price 3D printer. The Dimension’s introduction enabled designers to not only produce models for design verification, but also test functionality because the printer uses the same durable ABS plastic used in today’s end products. The system’s compact size and networking capabilities also made it ideal for an office environment, enabling easier access to model making for product design teams.

Today, Dimension 3D printers represent the majority of Stratasys’ installed base: a base that accounts for a 41 percent global market share, and includes other Stratasys brands Fortus and uPrint 3D Printers. Stratasys' 2010 unit sales were more than 3.5 times that of its nearest competitor, and the company has shipped 15,839 systems since its founding, according to Wohlers Report 2011.

Stratasys Inc., Minneapolis, is a maker of additive-manufacturing machines for prototyping and producing plastic parts. The company markets under the brands uPrint and Dimension 3D Printers and Fortus Production 3D Printers. The company also operates RedEye On Demand, a digital-manufacturing service for prototypes and production parts. Stratasys manufactures 3D printers for Hewlett Packard, which it sells under the brand Designjet3D. In 2011 Stratasys acquired 3D printer maker Solidscape Inc. According to Wohlers Report 2011, Stratasys had a 41-percent market share in 2010, and has been the unit market leader for the ninth consecutive year. Stratasys patented and owns the Fused Deposition Modeling (FDM®) process. The process creates functional prototypes and manufactured goods directly from any 3D CAD programme, using high-performance industrial thermoplastics. The company holds more than 285 granted or pending additive-manufacturing patents globally. Stratasys products are used in the aerospace, defense, automotive, medical, business and industrial equipment, education, architecture, and consumer-product industries. Online at: http://www.stratasys.com/

Forward Looking Statements
All statements herein that are not historical facts or that include such words as "expects," "anticipates," "projects," "estimates," "vision," "could," "potential," "plan", "intends", "desires", "assume" or "believes" or similar words constitute forward-looking statements covered by the safe harbor protection of the Private Securities Litigation Reform Act of 1995. Except for the historical information herein, the matters discussed in this news release are forward-looking statements that involve risks and uncertainties. These include statements regarding projected revenue and income in future quarters; the size of the 3D printing market; our objectives for the marketing and sale of our Dimension® and uPrint® 3D Printers; our support removal systems; and our Fortus® 3D Production Systems, particularly for use in direct digital manufacturing (DDM); the demand for our proprietary consumables; the expansion of our paid parts service; and our beliefs with respect to the growth in the demand for our products. Other risks and uncertainties that may affect our business include our ability to penetrate the 3D printing market; the success of our distribution agreement with HP; our ability to achieve the growth rates experienced in preceding quarters; our ability to introduce, produce and market consumable materials, and the market acceptance of these materials; the impact of competitive products and pricing; our timely development of new products and materials and market acceptance of those products and materials; the success of our recent R&D initiative to expand the DDM capabilities of our core FDM technology; and the success of our RedEyeOnDemandTM and other paid parts services. They also include statements about future financial and operating results of our company after the acquisition of Solidscape and anticipated benefits of the acquisition. Actual results may differ from those expressed or implied in our forward-looking statements. Such forward-looking statements involve and are subject to certain risks and uncertainties, which may cause our actual results to differ materially from those discussed in a forward-looking statement. Such risk factors include our ability to successfully integrate and market Solidscape products, our ability to attract and retain management, and our ability to protect and defend intellectual property. These statements represent beliefs and expectations only as of the date they were made. We may elect to update forward-looking statements, but we expressly disclaim any obligation to do so, even if our beliefs and expectations change. In addition to the statements described above, such forward-looking statements are subject to the risks and uncertainties described more fully in our current report on Form 8-K filed in connection with the completion of our acquisition of Solidscape and in our reports filed or to be filed with the Securities and Exchange Commission, including our annual reports on Form 10-K and quarterly reports on Form 10-Q.