Leading bike store, Cycle Surgery has built its biggest ever road bike for customer, PC Anthony Wallyn who, at 7’2”, is officially the UK’s tallest policeman.

Measuring in at a whopping height of 123cm, the bike is as tall as the average 7 year old child. At 177cm from wheel to wheel, it’s as wide as One Direction heartthrob Zayn Malik is tall, and its 60cm diameter wheels are virtually twice the size of a large takeaway pizza*. All measurements considered, PC Wallyn’s bike is almost twice the size of most seen on the streets. 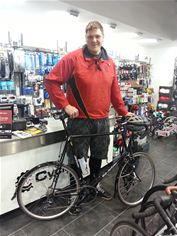 Standing 15” above the UK’s average man, PC Wallyn had previously been turned away by several bike stores who were unable to create something that suited his large frame, instead suggesting that he try a US company that made bikes for NBA players at a cost of approximately £3,500.

However, staff at Cycle Surgery’s Croydon branch were determined to help the famous PC and set about finding a suitable frame via eBay and second-hand dealers. While this proved unsuccessful, a chance conversation with frame specialists Bob Jackson Cycles was more fruitful; the team had 29" of specialist seat tubing in stock and were more than happy to build a frame for Anthony.

One month later, the frame arrived at the store and the Cycle Surgery team started sourcing parts, focusing on those that would be strong, light and comfortable. The finished product was collected by Anthony in March.

Steve Brill, Croydon store manager headed up the six-month project was there to handover the finished bike to Anthony. He said:

“I have never seen a grown man smile as much as that over a bike and it made all the months of work and running around worth it.

“I can truly say that Anthony’s bike was built with nothing but passion and love and am a little sad to think that I will never have another project quite like it!”

Cycle Surgery started in 1992 as a bicycle workshop in a basement in Islington and is now one of the UK's largest bike stores. There are 28 branches nationwide, all of which offer custom build and stock brands including Specialized, Cube, Orbea, Pearl Izumi and many more. For further details, visit: www.cyclesurgery.com.

*Takeaway pizza calculation based on a Domino’s large pizza having a diameter of approximately 69cm.

Final elements that made up the bike included: