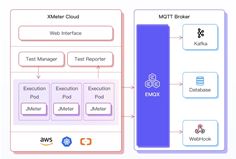 IoT has permeated almost all domains and provides a foundation for technology integration that is a key enabler of enterprise digital transformation. With the increase in IoT deployments, the need for IoT testing is increasing as well, challenging delivery teams to ensure the stable and secure operation of IoT devices. Especially in use cases involving mission-critical applications, comprehensive performance testing and verification are a must, and enterprise-scale load testing is becoming crucial for companies to manage complex IT architectures and massive volumes of IoT data.

XMeter Cloud is a fully managed MQTT load testing cloud service for IoT. Since its first release in 2016, XMeter has provided large-scale performance testing for mission-critical IoT applications. Currently, XMeter Enterprise Edition has been widely used across the Internet of Vehicles, Industrial IoT, Carriers, Finance and other industries, improving the quality and reliability of enterprise-level IoT systems by providing performance verification of different use cases.

“Nowadays, testing is crucial for IoT applications, and we strongly believe the benefits of XMeter Cloud will play a key role in creating a modern IoT testing framework. We’re able to get your IoT initiatives to market faster and more securely through providing proper validation and verification across all types of IoT devices and functions,” said Feng Lee, CEO and Founder of EMQ.

EMQX boasts more than 20,000 global users from over 50 countries, connecting more than 100 million IoT devices worldwide, and is trusted by over 300 customers in mission-critical IoT scenarios, including well-known brands like HPE, VMware, Verifone, SAIC Volkswagen and Ericsson.

EMQ’s global R&D center is located in Stockholm, Sweden. It has 10+ offices throughout the Americas, Europe, and the Asia-Pacific region. Visit http://www.emqx.com for information.