They Played with Bobby Moore – The West Ham Years 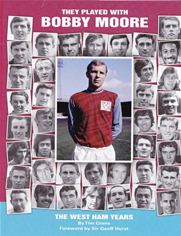 They Played with Bobby Moore cover

Includes hundreds of previously unpublished photographs and contributions from all 89 team-mates of Bobby Moore including:

They Played with Bobby Moore presents the colossal contribution made by the footballing genius through the memories of the men who shared centre stage with him from September 1958 until January 1974.

For the first time their stories and unpublished photographs have been showcased in one book:

Billy Bonds tells how the blond haired boy from Barking presented his school’s football trophies when Bonds was just 14-years-of-age.

Sir Geoff Hurst contributes the foreword and describes the effect Moore’s praise had on him.

Vic Keeble shares the time when he threw the future England World Cup winning captain out of his house.

The moment when Moore introduced Alan Stephenson to James Bond.

About the author: Since 2002 Tim Crane has been tracking down and interviewing former players of West Ham United for EX Hammers magazine which has its heritage in preserving the contribution made by every player to have pulled on the claret and blue jersey since 1895 to date.

A life-long fan, born in Poplar, his family has been making the journey to the Boleyn Ground since the pre-first World War era. It was during an interview with former 1970s West Ham winger Joe Durrell that Crane decided to set out on this journey: “When sharing the news with Joe that he was one of 89 Hammers to have lined-up with Bobby Moore in West Ham’s first team, the effect was highly emotional. I realised I was well placed to ensure that the recollections of all Bobby Moore’s West Ham team-mates were captured. I’m delighted to have interviewed the players and families of all 89 Hammers. Every attic, suitcase and shoe box has been explored! The journey has been mesmerising.”

How to order: They Played with Bobby Moore – The West Ham Years