SMi Reports: The agenda has been updated with new speakers and sponsors for the Defence Logistics Central and Eastern Europe Conference in Budapest, this March

For those interested in attending, an early bird saving of £100 will expire on January 31st at midnight: http://www.defence-logisticscee.com/realwirepr5 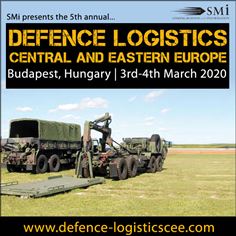 SMi Group are pleased to announce that Continest, US Cargo Systems, and Western Global have joined the sponsor line-up, as well as Crowley Maritime Corporation upgrading to Gold Sponsor for this year’s event.

The two-day agenda includes an unrivalled expert speaker line up of senior military and industry personnel, at the heart of logistics operations and supply from the:

The full agenda and speaker line-up can be viewed online at http://www.defence-logisticscee.com/realwirepr5

Moving to Budapest for the first time with the full support of the Hungarian Defence Forces, Defence Logistics Central and Eastern Europe will provide an unparalleled opportunity for delegates to engage and network with key figures and decision makers from 9+ different nations and agencies.

For sponsorship and exhibition enquiries, please contact Luke Teachen on +44 (0) 207 827 6130 or email lteachen@smi-online.co.uk