Birmingham, UK. 21 May 2015: UK households are wasting £259 billion worth of space storing junk, according to new research from Clearabee, the on-demand rubbish removal company. Combined, this junk mountain of useless and discarded items would cover 48.7 square miles, an area greater than the size of Edinburgh. 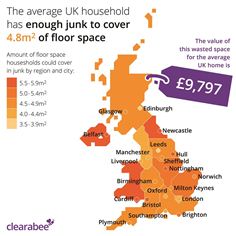 Clearabee's survey, which was conducted by research consultancy Populus, has revealed that the average UK home has enough junk to cover 4.8m2 of floor space.  This is equivalent to the size of a king sized bed and represents six per cent of the floor space in a modern three bedroom house. With house prices currently at £2,054 a square metre, the value of space wasted storing junk in the average UK home is £9,797.

With survey respondents spending an average of £334 a month on rental or mortgage payments, Clearabee has calculated that UK residents pay £495 million a month for the space they use to store junk in their homes.

Types and location of junk in UK homes
80 per cent of respondents to Clearabee's survey admitted to hoarding junk in their homes. Old clothes, electrical equipment, magazines, video tapes, CDs,  toys, packaging, furniture and exercise equipment were the most frequently cited examples of junk.

The survey revealed that people store discarded items in a range of nooks and crannies. Attics and wardrobes are the most popular locations, chosen by just under half of households, while one in three admitted to filling their sheds, garages and under stair cupboards with junk. A quarter of respondents stash things they no longer need under their beds. One in ten people simply leave old items on the floor.

Junk nation: wasted space across the UK
Hull is the nation's junk capital. The average home here contains enough useless or discarded items to cover 5.8m2 of floor space, which is about seven per cent of the living area in a modern three bedroom house. Edinburgh's homes are the tidiest in the UK, with just 3.9m2 of junk per household.

Residents of the North East of England hoard the greatest quantity of junk - averaging 5.7m2 of floor space per household. Half (49 per cent) of households in the North East contain enough useless and discarded items to fill a small bedroom. On average, each household in the North East is wasting space worth £6,910 on junk. In London, higher property prices mean that the average household wastes £17,547 of its value storing junk.

Rob Linton, operations director at Clearabee, comments: "In a nation where space is at a premium, it is staggering that almost one in three homes has enough useless junk to fill an entire room. The amount of junk we hoard tends to expand to fill the space we have at our disposal. While we've become very savvy at finding ways to store clutter around ourselves, most of us could get better at getting rid of it."

"You don't need to be a master of feng shui to realise that a tidy house is a tidy mind. Junk accumulates over time and steals valuable space in our homes and minds. We know from our work that people feel a sense of relief when they eventually get rid of it.

"One person's junk is potentially another's treasure, so it is always worth seeing whether charity shops, eBay or a freecycling service could find a new home for your unwanted stuff. Firms like Clearabee can help you get rid of junk within a matter of hours and ensure it is recycled and disposed of properly."

Methodology
In April 2015 Populus asked a UK representative sample of 2,098 people about the type, quantity and location of junk stored in their homes. The results of this research was considered alongside data on property prices and characteristics from the Office of National Statistics, the Halifax House Price Per Square Metre Survey and the Royal Institute of British Architects to calculate the value of UK residential space wasted on junk.

ABOUT CLEARBEE
Clearabee is a rapidly growing business providing on-demand junk clearance and rubbish removal services to thousands of domestic and commercial customers across the UK each month. Based in Birmingham, it operates a fleet of 25 vehicles from eight depots across the UK. Clearabee is licenced by the Environment Agency, accredited by the Contractors Health and Safety scheme and is an affiliated member of the Chartered Institute of Waste Management. More than 85 per cent of the waste collected by Clearabee is recycled or reused. Clearabee actively chooses zero-to-landfill waste processing partners wherever possible.