UK ranked sixth in global 5G market, according to OMDIA 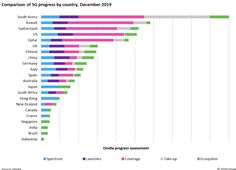 Based on these factors OMDIA’s research concluded that South Korea – as it did in the 4G era – has established itself as the early market-leader for 5G technology deployment with Kuwait and Switzerland following behind. According to the report, South Korea is leading the way with 5G adoption, reaching 4.67 million subscribers at the end of December, which equates to seven per cent of wireless services in the market.

“Limited coverage, device availability and cautious launches has limited take-up in other global markets,” said Stephen Myers, OMDIA Principal Analyst. “However, expansive coverage rolled out by Sunrise and Swisscom in Switzerland, Ooredoo and Vodafone in Qatar and Kuwait's three service providers has rivalled Korea for breadth of market coverage.”

In terms of the UK market, OMDIA commented that with all four major operators now launching commercial 5G services the focus would now fall on operators’ ability to scale up 5G coverage across the country, noting that the UK Government is investing money to ensure rural areas also benefit from 5G deployment.

“The UK Government has identified 5G as a key technology to assist in its goal in delivering nationwide Gigabit broadband by 2025,” said Stephen Myers, OMDIA Principal Analyst. “The UK government’s £1.1 billion digital connectivity package, including the £400 million Digital Infrastructure Investment Fund will support investment in new fixed and mobile networks, through programs such as the 5G Testbeds and Trials Programme.

“Right now the UK is second only to Switzerland in terms of 5G deployment in the European market and as things stand is well positioned to lead its continental rivals in the deployment of 5G – giving it a potential advantage in terms of developing next-generation industries.”

The report is based on data relating to the end-December period and was originally due for publication in mid-March but was delayed because of the impact of COVID-19.

The full 5G Market Progress Assessment, end-2019 report can be purchased from OMDIA by contacting Karthik.Jayakumar@omdia.com.

The combination of these criteria reflect the readiness in markets yet to launch services and development in markets where 5G services have been launched. While using coverage metrics does advantage small geographies, where a large proportion of the population can be covered with 100’s of base stations rather than 1,000’s or 10,000’s, broad and deep coverage remain prerequisite for the transition of services to 5G. As 5G services mature and as enterprise applications become more central to service provider offerings it can be expected the criteria for assessing 5G progress would evolve.

The rankings use a relative assessment, effectively assigning Korea a score of 100% for the September quarter due to its global leadership across all five of the assessment criteria: