Fairness in collaboration, greater care in investigative reporting and reliability with respect to agreements are German PR professionals' three most important wishes from journalists. dpa subsidiary news aktuell and Faktenkontor have surveyed professionals and managers on what they would like from journalists. Almost 990 communications professionals participated in the PR-Trendmonitor. 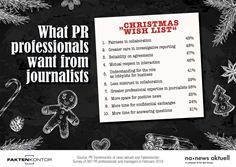 It found that fair play between communicators and journalists was at the top of the wishlist: Almost half of those surveyed said that fair collaboration was the most important (49 per cent). The desire for greater journalistic care in investigative reporting was second (48 per cent). Almost as important for the PR professionals was that they are able to rely on agreements made with media representatives (47 per cent).

By contrast, good news was last on the rankings. Just a quarter of those surveyed would like to see more positive news items in the media (25 per cent). And only a few communicators experienced a lack of time for background interviews. Only a quarter expressed the desire for more time for confidential exchanges with journalists (24 per cent). When it comes to answering questions, the situation is similar: Only a fifth wanted more time to answer questions from media representatives (21 per cent).

What PR professionals want from journalists:

About news aktuell
As a wholly owned subsidiary of dpa, news aktuell provides business and organizations with effective access to media and consumers. Via the smart tools ots and zimpel, PR content accesses all media formats, including classical print, high click-rate online portals and social networks. In addition, news aktuell publishes all its customers’ PR content on www.presseportal.de, a PR portal with the one of the greatest reaches in Germany. This means that all the relevant multipliers are reached globally, from editors, via digital influencers right up to specialist bloggers and interested consumers. news aktuell has been on the market since 1989. It has a staff complement of more than 135 employees. Company headquarters are in Hamburg. There are branch offices in Berlin, Dusseldorf, Frankfurt and Munich.