Yazino, the specialist in in-sync social gaming, launches its sixth game on Yazino.com and Facebook

London, 4th August 2011 – Yazino today announced the launch of its latest in-sync social game, Extreme Bingo - a dynamic, fast paced and team-based take on traditional bingo. Yazino is the leader in synchronous multiplayer social games - an approach called ‘in-sync gaming’. Yazino players are able to compete in real-time with each other in a fun environment where they can invite their friends, chat, or simply play with a network of like-minded people. Yazino games feature levels, achievements, leaderboards and tournaments, amongst friends and the rest of the Yazino world. 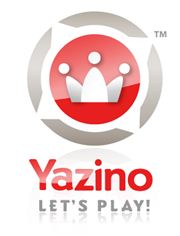 Extreme Bingo takes its inspiration from classic games of skill like Battleships, Minesweeper and Uno, allowing teams of players to compete for control of the ‘Battleboard’ at the same time as they can individually win by being the first to complete their bingo cards. Extreme Bingo is the latest game launched by Yazino that is built around its unique in-sync gaming platform empowering people playing games together in real-time. Extreme Bingo and Yazino’s other games, including Wheel Deal, Roulette, Blackjack, Texas Hold’em and Hissteria, are free to join and play at Yazino.com and on Facebook.

“What we’ve done with Extreme Bingo is taking the best elements of bingo and add a competitive edge and some uniquely social hooks, turning it from a game of chance to a game of teamwork and skill,” said Hussein Chahine, Yazino’s Founder and CEO. “Extreme Bingo is a perfect example of Yazino’s approach to social gaming.”

Just like traditional bingo, a numbered ball is called every round, and if that number appears on any of the players’ bingo cards, it’s crossed off. But what makes Extreme Bingo different is that this is only where the game really starts: for every number that’s crossed off, players gain power-ups which can be placed strategically on the Battleboard. Each player tries to turn as many of the Battleboard slots as possible to their team’s colour, using power-ups to help their own team or block their opponents; power-ups can even be chained together for greater effect.

Players on the same team can see the power-ups placed by their team mates, but not their opponents, leading to fast and frenetic games where the winner isn’t clear until the very last move! The game ends when a player calls ‘Bingo!’ - with the team that has the greatest share of the slots of the Battleboard sharing the bonus team prize.

In-Sync play with friends
Each game of Extreme Bingo is played between three teams of two players each. Players can invite their existing Yazino friends to play or join an open table on the Yazino network.

Battleboard
The Battleboard in Extreme Bingo is a true innovation and cannot be found in any other bingo game! It adds a unique action-packed team gameplay mechanic. The battle board contains 70 numbered "slots." Whenever a bingo ball is called, the slot with the corresponding number is changed to the corresponding team colour of the ball, along with the four other slots immediately surrounding it. The team with the most coloured slots wins the Team Prize when ‘Bingo!’ is called.

Power-ups
Power-ups allow team members to protect slots (Shield) or attack (Phoenix) other slots on the Battleboard. Each player is awarded a power-up each round in which a number is dabbed on their bingo card. Power-ups that have been placed on the Battleboard are triggered when a slot is converted to the corresponding team's colour either from the bingo ball colour or as the result of another power-up.

Prizes
There are both individual and team prizes to be won in every game and the prize pool is composed of the sum of Chip buy ins made by each player at the start:

Calling Bingo!:
This individual prize is allocated one third of the prize pool and is won by the first player to cross off all the numbers on their bingo card and call Bingo!

Battleboard Domination:
This team prize is allocated two thirds of the prize pool and is awarded to the team that controls the largest portion of the Battleboard when Bingo! is called. The team prize pool is split evenly among the winning team members.

About Yazino
Yazino develops innovative social games, which use real-time multiplayer technology - an approach we call ‘in-sync gaming’. Yazino players are able to compete with each other in a fun environment where they can invite their friends, chat, or simply play with a network of like-minded people to create new levels of real-time social interaction and friendly competition between people.

Yazino is the destination for playful grown-ups seeking an intimate and fun social gaming experience. We believe that friendly competition encourages play and positive interaction, and in our busy, often serious world, play creates happiness and brings players together. While playing games, we become the truest version of ourselves.

Yazino games feature levels, achievements, leaderboards and tournaments between you, your friends and the rest of the Yazino world. Try our games at Yazino.com, on Facebook or on your iPhone and iPad - whenever you feel a desire for some friendly competition.

Explore for yourself what makes Yazino games so different at Yazino.com.

Yazino was founded in 2009 by Hussein Chahine, Bijan Khezri and Gojko Adzic.