17 May 2010: An HP survey into the evolution of digital media in Britain has revealed that while we’re not in the Dark Ages when it comes to the progression from physical to digital ownership of media, we’re far from being Space Age. 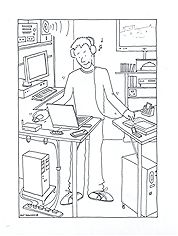 The survey of over 1000 British consumers, aged between 16 and 60, shows that people of all ages are still wedded to physical formats such as CDs and DVDs. They also currently attach little monetary or emotional value to the digital content they own.

While 86% of the population access some form of digital media, 68% still prefer photographs to be physical rather than digital, 64% for music, 75% for films and a massive 95% for books. While the 16-24 and 25-34 age groups are the most enthusiastic when it comes to digital media, many of them (39%) are still purchasing CDs and DVDs alongside digital formats. The move to subscription based models is even more far out, with 73% of the sample saying that they can never see a time when they’d move to a 100% subscription model for their music and films (such as Spotify).

“In this technologically driven age it is easy to get carried away and think that everybody is embracing digital and leaving physical behind,” says Shaun Hobbs, Home Server Manager for HP PSG UK and Ireland. “Our survey shows that this isn’t the case. Britons are on an evolutionary journey with media still being bought on multiple formats and enjoyed using a variety of devices.”

The research suggests that Britons are treating their media collections more as a utility rather than a personal purchase. 71% say they have never lost their media library and are not worried about security while 27% put their digital media collection’s value at less than £50. Contrast this to how we value our CDs, DVDs and books and it’s clear Britons have a different approach to digital rather than physical.

Adds Hobbs: “We’re not yet ready to give up the old ways of purchasing media. However, the survey shows that the benefits of being able to access and enjoy a much broader range of content thanks to the Internet are also clearly appreciated. It’s a safe bet to assume attitudes will change to favour digital over physical but at present, we’re happy to have both.”

Addressing this new era of digital media, HP’s MediaSmart Server (basically a small PC but with lots of storage) acts as a central ‘store’ for music, films, pictures and other digital content allowing people to protect, share and enjoy their media on any Internet-connected device whether it’s in the home, on a mobile or in another country.  Where it’s via the free iPhone app, through an X-box or PS3 or through a secure, personalised URL, MediaSmart Server lets you stream your favourite playlists (using an in-built iTunes server), family photos, films and other digital media to a device and location of your choosing.

Note to editors: The full report is available on request. Please contact 020 3047 2000 or psguk@edelman.com